It's All About Having Fun!
Movies Reviews 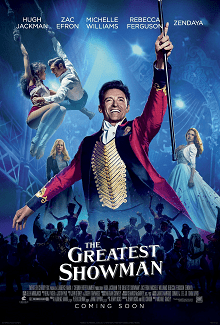 As you read this review you will learn that there is something called “An Anne Movie”. It means a romantic comedy, a musical, or a movie with Meryl Streep. Seriously, I seek films that are enjoyable. I like many movies depending on the cast. “Who’s in it?” will often be my first question about a movie.

The movie I am reviewing today qualifies most definitely as “An Anne Movie”. It is a musical and has an awesome cast: Hugh Jackman, Michelle Williams, Zac Efron, and Zendaya. It is called “The Greatest Showman” and was directed by Michael Gracey and written by Jenny Bicks and Bill Condon. It is the story of PT Barnum and his creation of live entertainment which later became known as Barnum & Bailey’s Circus and most certainly the birth of show business.

I loved this movie. Hugh Jackman is a very talented singer and actor. The musical numbers were lively and put to a modern beat within the context of the 1800s. The themes were current: acceptance and courage stood out for me. PT Barnum came from a poor background and later had a family that he loved, to support. He dreamed big and those dreams became reality. The fame and glory got the best of him along the way, so redemption and humility were part of the story as well. It took place when the class system was in full swing in the world.

As he created his show, Barnum brought in people for his show, who had been hidden in the shadows of everyday life. The bearded lady, the largest man on Earth, the most tattooed man, the smallest man, etc all were made to feel like stars when they performed. And the show became a hit, with many in the town. Others, who were not accepting of the odd performers remained enemies of PT Barnum and protested his spectacular show.

The musical numbers were magical and memorable. Each of the main characters had singing numbers. Zac Efron and Zendaya were part of an inter-racial romance during a time that a relationship like theirs was not acceptable. Their big number had amazing choreography involving heights, spinning and a rope, all at the same time they sang (beautifully I might add). I call that “a triple threat” not to be missed. The song “This Is Me” won Best Original Song this month at the Golden Globe Awards. It was sung by Keala Settle & The Greatest Showman Ensemble.

I have seen Michelle Williams in other movie roles and had no idea that she could sing so well. From beginning to end, “The Greatest Showman” was a rags-to-riches story with a twist of old-time feel-good entertainment. A definite “Thumbs Up – Anne Movie”. I am looking forward to watching it again and then buying the motion picture soundtrack, too. So, if you want a movie to enjoy and one that entertains, I recommend “The Greatest Showman”, in theaters now! It will be released on Blu-Ray this coming Spring. You can pre-order it now!