It's All About Having Fun!
Favorite Things Hobbies Music 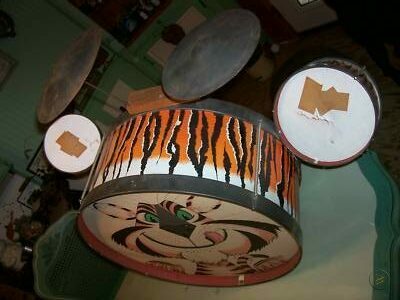 Ever since I was a kid I have loved the sound of the drums. I couldn’t wait for the TV show Hawaii-5-O just to hear the drums at the beginning of the theme song. I wanted to take lessons, but that’s a hard sell in an already noisy house with five kids, so my mom let me get some wooden drum sticks, only. I also had a pair of metal brush drum sticks, too. I’m sure I was annoying drumming on everything from the stair’s banister to the counter and tables.

My parents were not about to give me a drum set, so I thought of a sneaky way to get them myself. I found a set I could afford at the local toy shop. It had a picture of a TIGER on the front of the bass drum. The cost was only $15! What if my friend gave me a Christmas present (the drum set), I couldn’t turn it down, right? You see where this is going.

So my sister, my friends, and I went down to the toy store with our red wagon. I bought the drum set with money that I had saved up washing cars in the neighborhood. We had the giant box gift wrapped so I wouldn’t be tempted to play them before Christmas Day. But that didn’t work. As soon as we got the drums to my friend’s house, I carefully unwrapped the “gift” opened the box, and set them up. This was going to be a blast!

Seriously, this was a TOY drum set and I was in 7th or 8th grade, but I didn’t care. On Christmas morning my friend Peggy came over and delivered this huge box to me. In exchange, I gave her some “socks” or something more normal between friends. My parents were stunned to see the size of this present and even more so when the box was opened.  (Years later, I did confess to my scheme!)

I set it up right next to the Christmas tree in our living room. My younger brothers all took turns trying it out. My mother, the classical pianist was in shock for weeks. The drums lasted a while until a drum stick went through the top of the snare drum. I don’t recall when they “disappeared” from the house. My longing for more drums still persisted.

Fast forward to a more recent birthday of mine. My son and partner were heading out for a shopping day. They took our good friend, Todd who happens to be an awesome drummer along with them. I thought nothing about it, though apparently clues were being dropped right and left. A few days later at my family’s birthday party, I see a giant box in the next room. My son dragged it in. I opened a smaller present of “drum sticks”. My mind was racing, could it be the one thing I’ve been dreaming about for years and years?

As an Amazon Associate, I earn from qualifying purchases.

​What do you know, it was a set of electronic drums. The kind that you plug in and can only be heard with an amplifier or by using headphones. Brilliant! No one in the house has to be tortured by the racket and noise the drummer creates! I was so surprised, that I was in tears. Someone has to really love a person to GIVE them drums! Especially, when they aren’t even good at playing them!

I have them set up in my office and watch beginning instructional YouTube videos on how to play them. I am inspired by some “women of a certain age” that play well, too. Here are two videos of a couple of Grandmas/Moms playing “Wipeout”, another favorite drum song that I love. I hope to be able to have my own video up on YouTube someday, playing the same tune! Stay tuned!

Day 12 – Positive Attitude is Everything

Meghan, The Duchess of Sussex Talks with Serena Williams