It's All About Having Fun!
Hobbies Outdoor Activities Pickleball Ultimate Blog Challenge

Have Pickleball Net, Will Travel – Easy Set Up and FUN!

Have Net, Will Travel!

In Marin County, CA where I live, the tennis courts have been open, which is great, but not our pickleball courts, which are set up on the tennis courts at the local park. My own tennis foursome has been shut down since last March because we play at a private club and three of our four are not members (members only can play currently). I have not played tennis or pickleball for quite a long time, which has been challenging for an active person like me!

That is until I bought my own portable pickleball net! I love the orange metal frame. It’s so colorful! I found an ample enough outdoor space at the local middle school basketball courts and set it up recently! It’s awesome. My friend and I played singles, well distanced and outdoors. We used some of the painted-on lines from the playground and add some rubberized lines of our own, which I also bought to make the dimensions pretty close to the actual size of a pickleball court.

Full disclosure: As an Amazon Associate I earn from qualifying purchases. 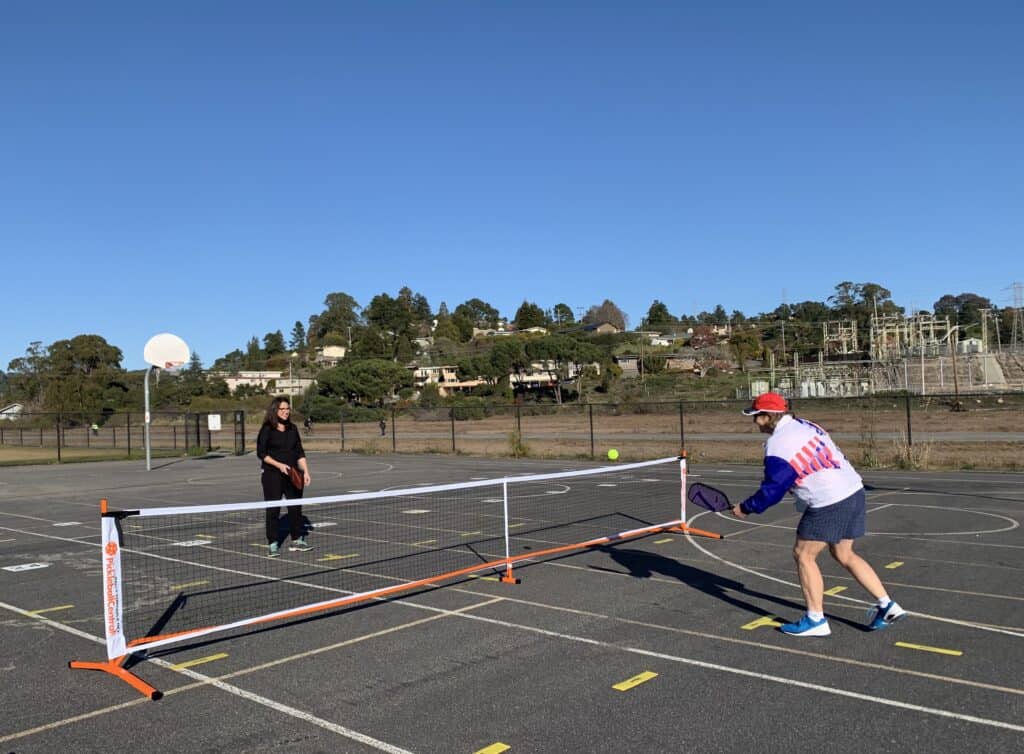 What the Heck is Pickleball?

For those who are wondering what in the world pickleball is, here goes. It’s a court game, played outdoors or indoors with a paddle and hard plastic ball that looks similar to a whiffle ball. While there are many great pickleball paddles on the market. I like this one! It’s a mid-range paddle that I have been playing with for about two years: Onix Graphite ZFive Paddle.

One can play singles or doubles or just rally back and forth without playing an actual game or match. The scoring is a bit different than in tennis, but if you can count, you can learn and get used to pickleball scoring.

Baddle Paddles are very popular! Click the link below! 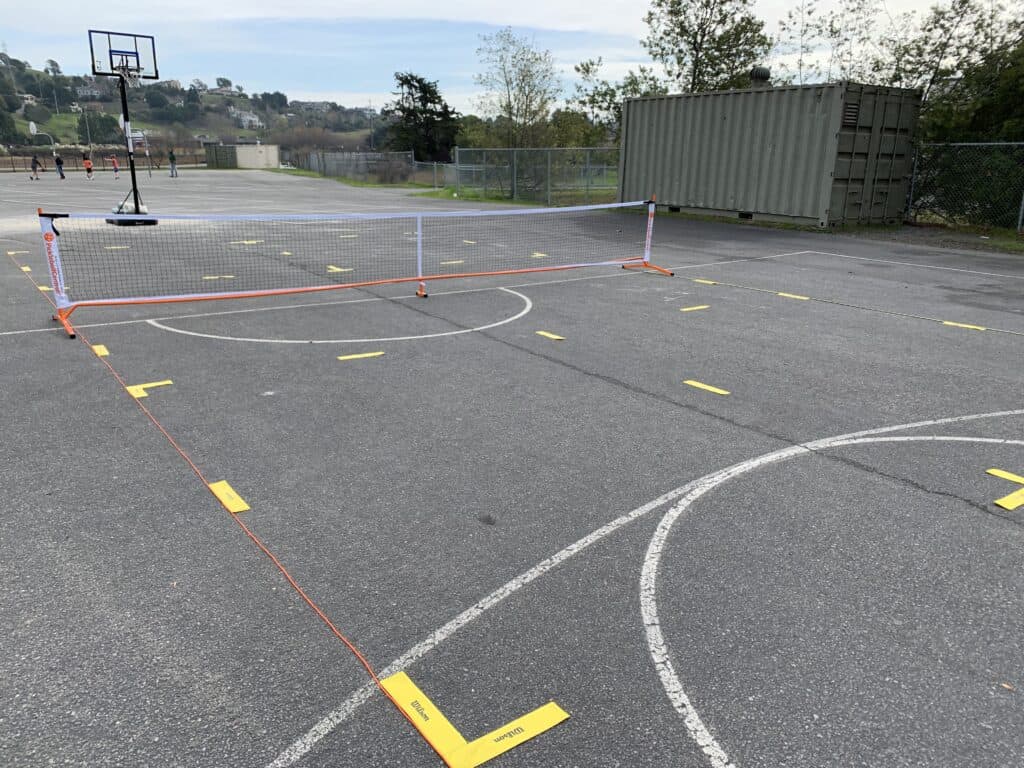 It is a very social game, though there are competitions and tournaments worldwide. It has been around for about fifty years and is all the rage, especially with many tennis players, since the court is half of the size of a tennis court AND you serve the ball using an underhand style motion, making it a bit easier on the body!  The net is slightly lower than a regulation tennis net. 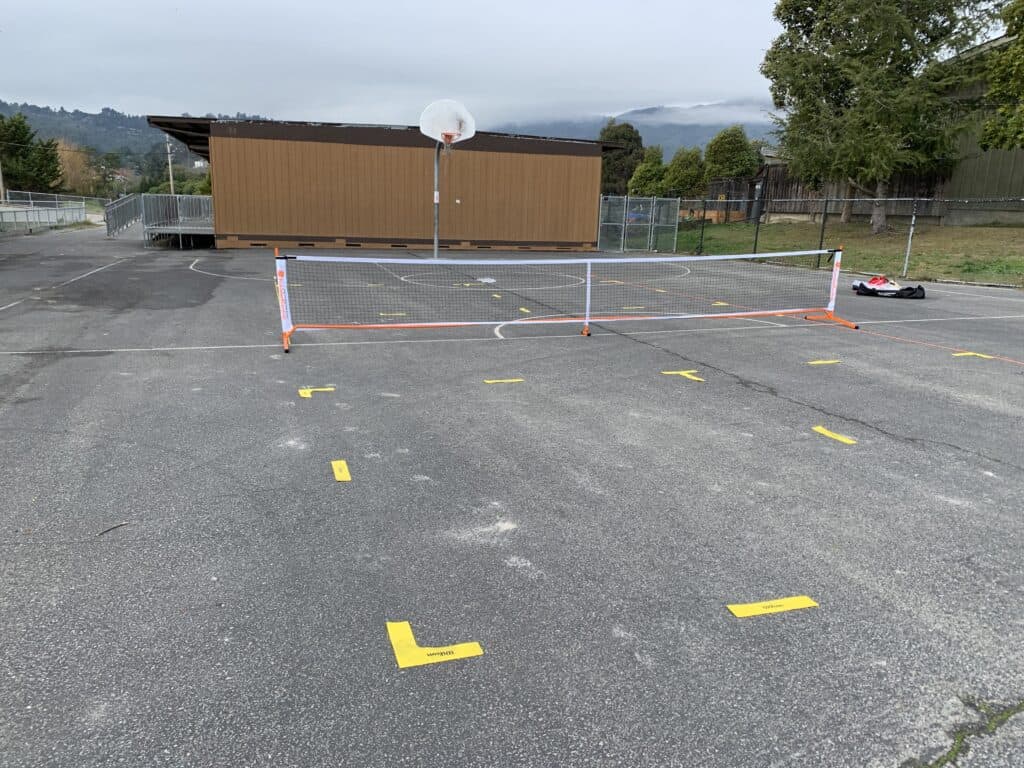 Setting up the court and net took about fifteen minutes the very first time and a few minutes less, the second time. You can see from the photos, that a tape measure is needed and with the reusable lines, one can adjust things as you go! The length of the pickleball court is 44 feet in total x 20 feet across. The net is placed in the center of the distance to make two even sides to play on. 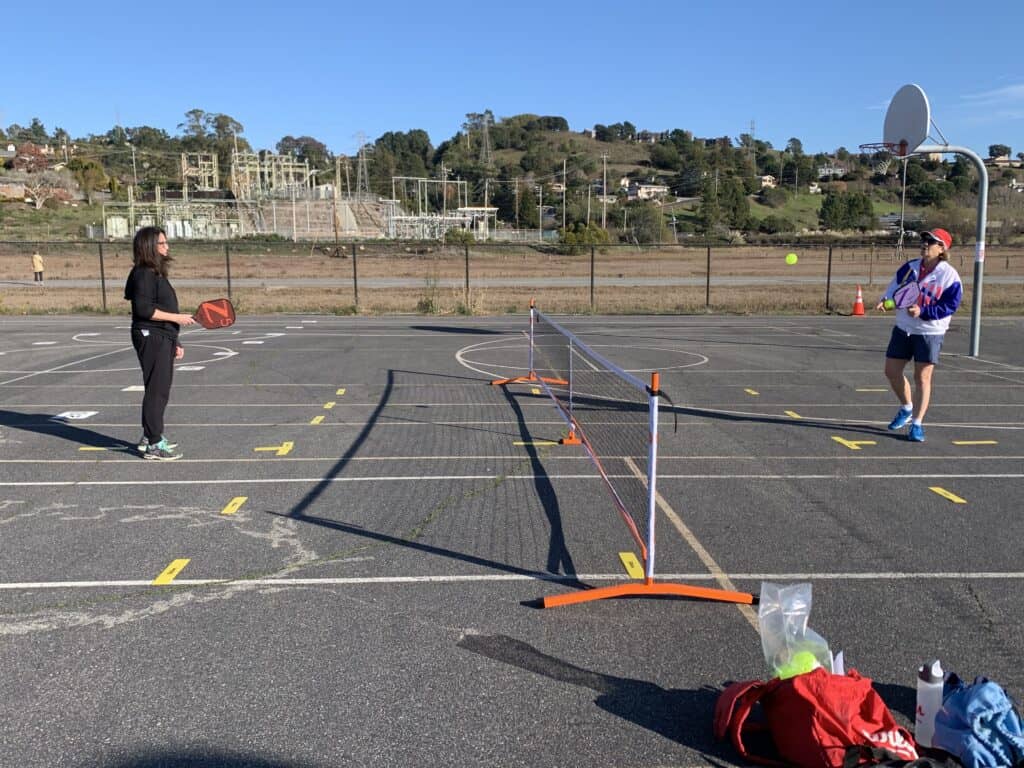 At the front of the court, closest to the net is a section called the “No Volley Zone”, better known as “The Kitchen”. One can step into the kitchen to hit a ball that bounces, but one can never stand in the kitchen or touch the surrounding lines while hitting a ball in the air. You will lose the point, or the service goes to the opponent’s side (side out). 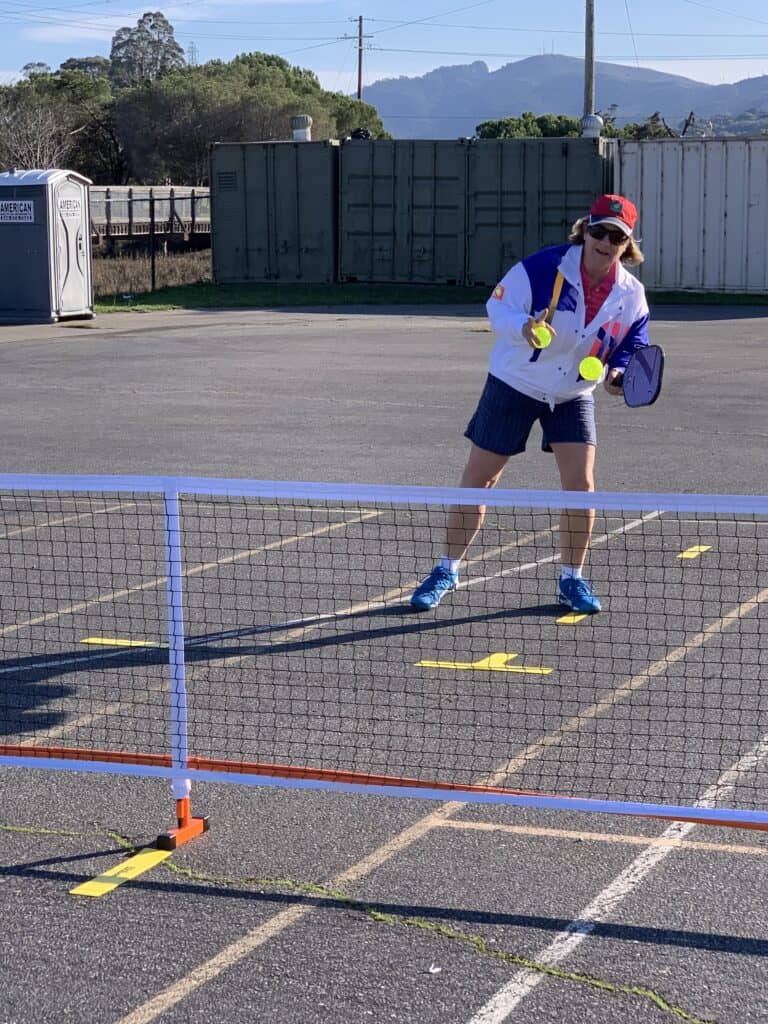 There are two service boxes: a right box and a left box and the server alternates hitting serves into one for one point and changes for the next and so on. Since the server only gets one chance to serve, it’s similar to volleyball serving. In tennis, the server gets two chances to hit their serve into play.

After the serve is hit, the receiver on the opposite side of the net returns the serve, and if the hits in bounds and in play, the third hit must bounce on the court before a volley is allowed (a ball hit on the fly or in the air before bouncing). That may sound confusing, but the beginning of the game must have three shots that hit the ground before any can be hit on the fly. This is true for each and every point after that as well.

Pickleball is a bit like tennis, volleyball, and badminton and takes rules from several of them. YouTube has videos that make it easy to learn and watch, or it’s best to jump right in and learn as you play! Here’s a video on how to serve in pickleball. 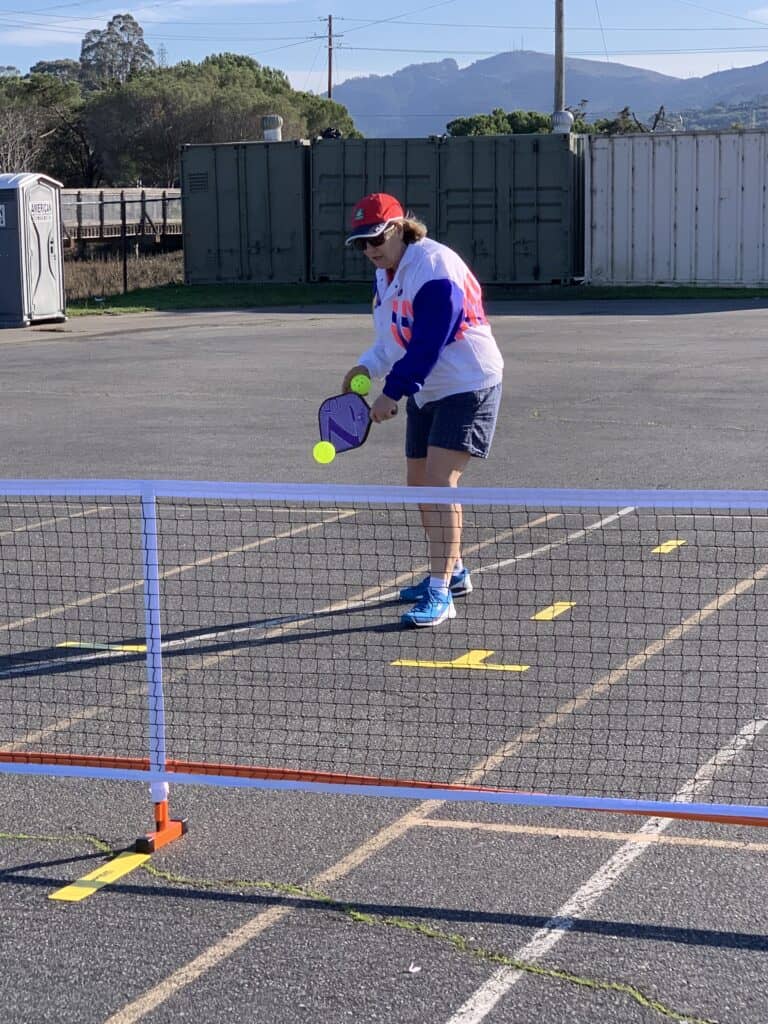 The game of singles can give a player a very good workout, which after not playing for many, many months did exactly that for me!  My friend and I hit some practice serves, worked on dink shots close to the net, and rallied as well. It was fun to use a bunch of balls during our practice session so that we didn’t have to chase each ball one at a time. My favorite balls to play pickleball with are Franklin outdoor balls.

When we were done after about an hour, we took the net down and stored it in its own carry bag. I am hoping to find other spots to set my new pickleball net up and get in more practice as we wait for the pandemic to get under control. I love playing and hope 2021 gives us more opportunities!

Have you played pickleball yet?

What are you waiting for?

They Say That A Photo is Worth A Thousand Words